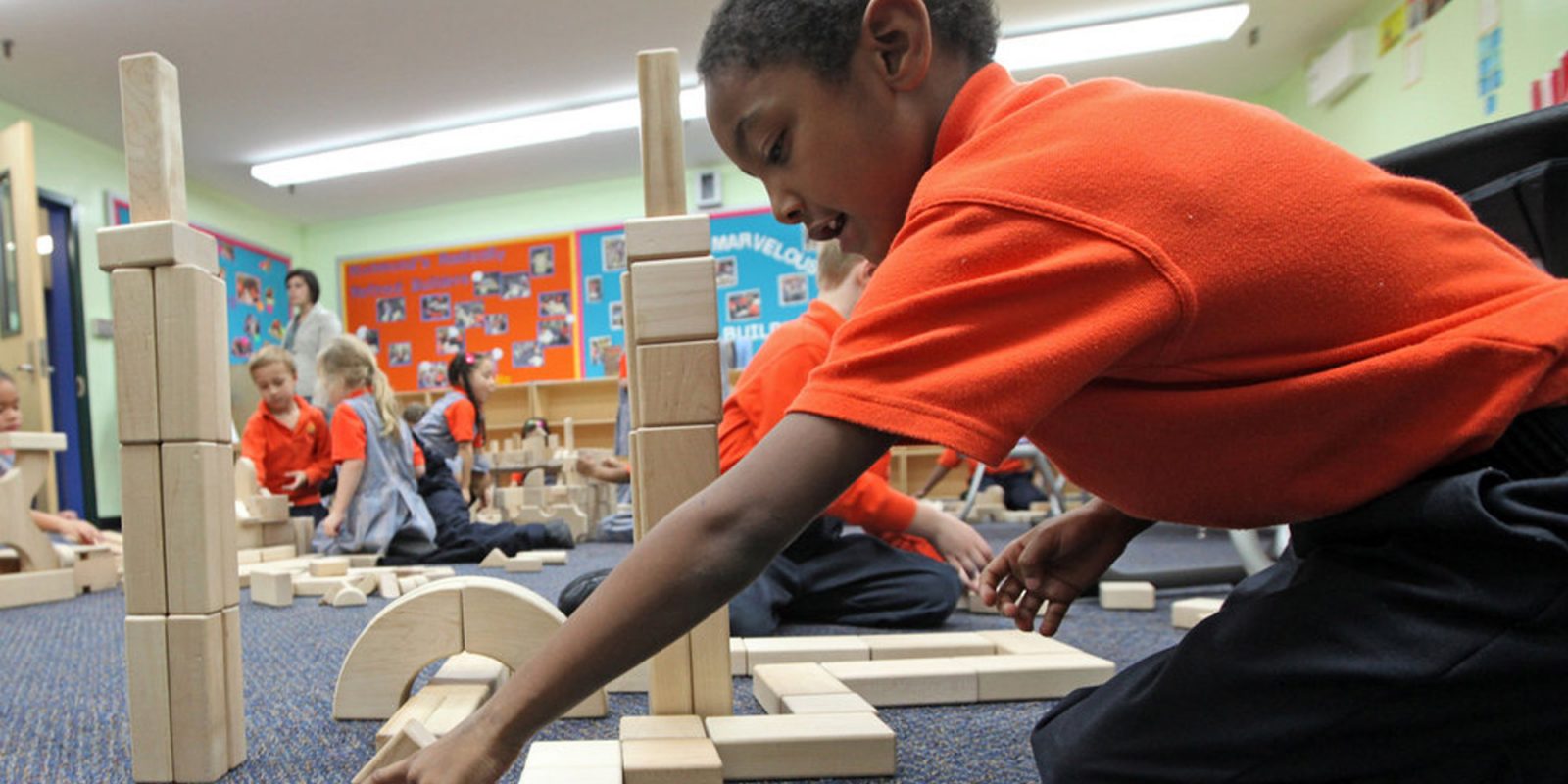 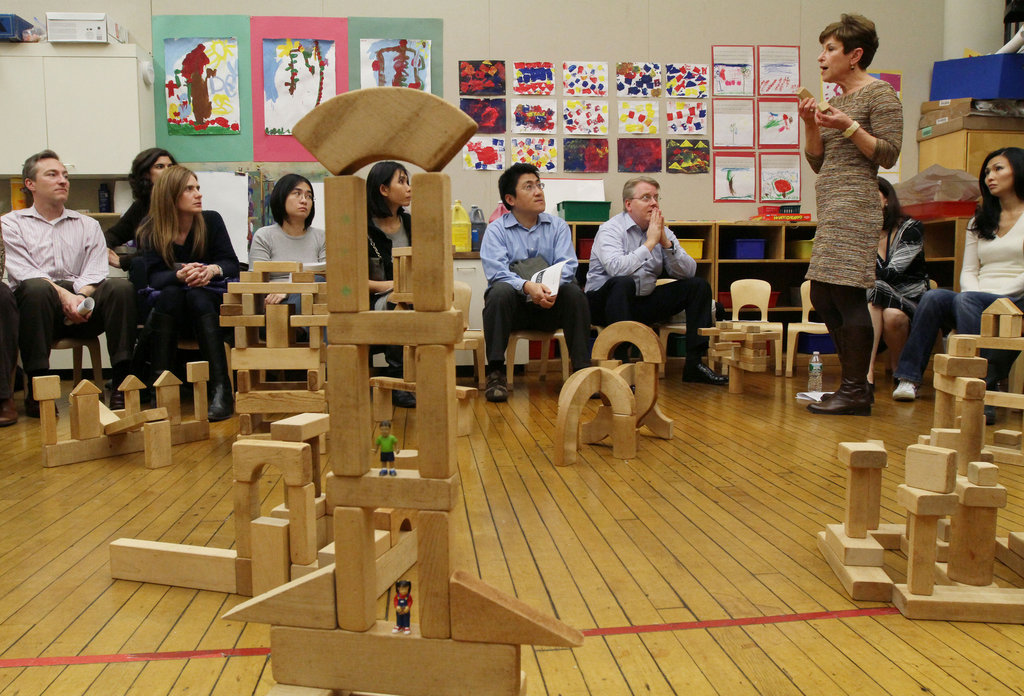 Huddled together on the reading rug of a prekindergarten classroom on the Upper West Side, three budding builders assembled a multilayered church with a Gothic arch. Nearby, another block artist created a castle with a connecting courtyard. Meanwhile, a fifth toiled earnestly on a shaky tower, eliciting oohs and aahs from across the room when it came tumbling down.

These were not prekindergartners, but members of the Parents League of New York, who had crowded into an oversubscribed workshop on block building last month. The tower constructor, a lawyer named Matthew Hurd, was still wearing a suit.

Jean Schreiber, a self-described “block consultant,” advised the group to engage their children in building by photographing their work. “Don’t rush to help them with structural challenges,” she said. “You don’t have to ask them a million questions. Just sit with them and notice.”

As in fashion, old things often come back in style in education. The Parents League workshop reflects a renewed faith in unit blocks — those basic, indestructible wooden toys created in the early 1900s — sweeping through some elite swaths of New York’s education universe. While many progressive private and public schools have long sworn by blocks, more traditional institutions are now refocusing on block centers amid worries that academic pressure and technology are squeezing play out of young children’s lives.

Eva Moskowitz, the former city councilwoman who runs a fast-growing network of charter schools, said her schools had created a “religion around blocks,” and she proudly advertises their fully outfitted block labs alongside the chess program and daily science classes. The International School of Brooklyn is developing a program using blocks to reinforce foreign-language acquisition. And Avenues, the for-profit school scheduled to open next year in Greenwich Village, is devoting a large section of its kindergarten floor to a block center.

“If you talk about block program with parents these days,” said Libby Hixson, director of Avenues’ lower school, “they just light up.”

National school-supply companies like Becker’s and Lakeshore added more than a dozen block-related products to their catalogs this year. And at City and Country School, the West Village private school founded in 1914 by Caroline Pratt, who is credited with inventing unit blocks, there has been a marked increase in observers from local schools that do not have the progressive pedigree usually associated with block play.

Fretta Reitzes, who runs an early-education conference every November at the 92nd Street Y, said the block workshop sold out so quickly this year that she added a second one. “What we’re seeing,” she said, “is teachers really caught between these very prescriptive curriculums and their desire to give kids opportunities to explore.”

Sasha Wilson, co-director of the four-year-old Bronx Community Charter School, said his faith in blocks was solidified by a struggling second grader’s actions after an apple-picking field trip. “She went to the block corner and built an incredibly complex structure, a tractor engine, and she was able to talk about how all the parts moved,” Mr. Wilson recalled. He said he told his staff a few days later: “We need to be looking at this student in a very different way.”

Caroline Pratt’s original unit blocks were made of smooth, splinter-free maple, though cheaper sets are now available in birch, beech and rubberwood (experts say it costs about $1,000 to outfit a classroom). Sets usually include 5.5-inch-long rectangles as well as pillars, columns, triangles, curves and longer rectangles.

Studies dating to the 1940s indicate that blocks help children absorb basic math concepts. One published in 2001 tracked 37 preschoolers and found that those who had more sophisticated block play got better math grades and standardized test scores in high school. And a 2007 study by Dimitri Christakis, director of the Center for Child Health, Behavior and Development at Seattle Children’s Hospital, found that those with block experience scored significantly better on language acquisition tests.

But perhaps the hottest pitch of late, particularly to high-stress, high-strung New York City parents, is that blocks can build the 21st-century skills essential to success in corporate America.

At the Chapin School on the Upper East Side, where educators have spent the last several years weaving a comprehensive block program into kindergarten and first-grade math and social studies, students toiled together on a grocery store and a fancy hotel one recent morning, beneath a sign that read: “When Partners Disagree They Try for a Win-Win Solution.” Nearby was another sign, outlining a seven-step building guide, that looked as boardroom as it did classroom.

Ms. Reitzes, who runs the youth center at the 92nd Street Y, said many educators were embracing blocks as an antidote to fine-motor-skill deficits and difficulty with unstructured activity, problems that they blame on too much time in front of screens and overly academic preschools. Sara Wilford, director of the “Art of Teaching” graduate program at Sarah Lawrence College, sees it as an obvious backlash. “There are so many schools where children are seeing less and less play,” she said. “And I think parents are getting that that is not going to help them.”

But many of the newfangled block centers go beyond unstructured play. Students are encouraged to continue working on the same structure, sometimes for weeks. Teachers seize on opportunities to connect what they are building to the curriculum. And technology is often involved.

Jessica Thies, a teacher at Chapin, said her students photographed their block extravaganzas with one of the school’s iPads. Last year, they made a documentary about blocks using a Flip video camera and edited it during computer class. “It is very low-tech/high-tech here,” Ms. Thies said.

At the 92nd Street Y preschool, teachers videotape students doing block work so they can review their process. And at the Packer Collegiate Institute, the Brooklyn Heights private school where educators have recently recommitted themselves to blocks by hosting workshops for teachers and moving block corners to more centralized locations, students often use classroom computers to search for images or watch videos that help them visualize something to build.

Rajul Mehta, who has two daughters at Chapin, fondly recalls playing with blocks during her own childhood in Mumbai and appreciates their applications in math, science, architecture and aesthetics. “These are very basic skills that our children can take back into their daily lives,” she said.

Riley Palmer, a second grader at City and Country, said that creating a series of Brooklyn Bridges, each about three feet tall, helped her class understand what it had been like for the original builders. “There is so much you can do with blocks,” Riley said. “You can stagger them. You can stack them. It’s fun and cool. And when we’re done, we’re going to be able to show everybody in school what we did.”