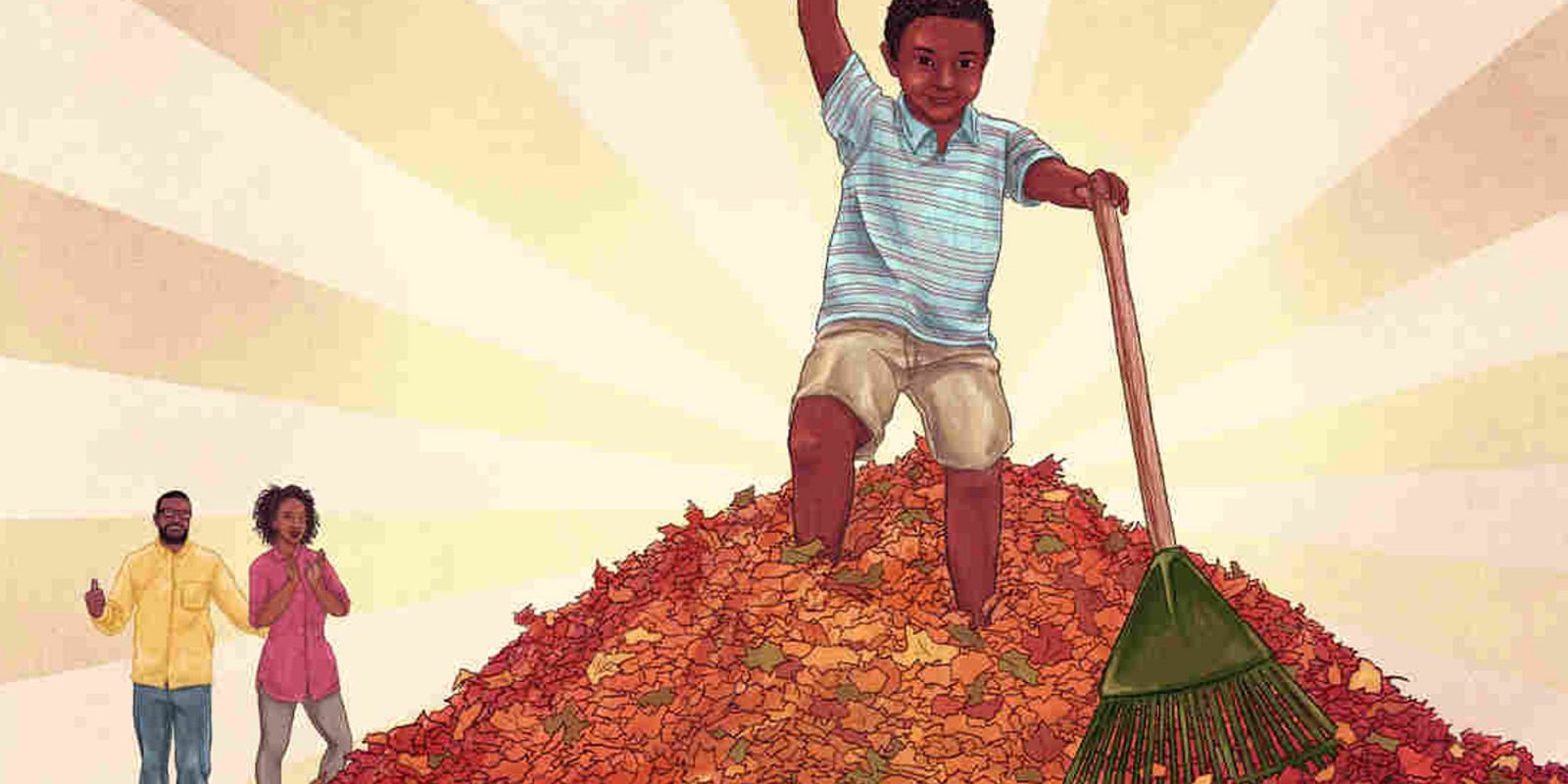 “Childhood — and parenting — have radically changed in the past few decades, to the point where far more children today struggle to manage their behavior.

“We face a crisis of self-regulation,” Lewis writes. And by “we,” she means parents and teachers who struggle daily with difficult behavior from the children in their lives.

Lewis, a journalist, certified parent educator and mother of three, asks why so many kids today are having trouble managing their behavior and emotions.

Three factors, she says, have contributed mightily to this crisis.

First: Where, how and how much kids are allowed to play has changed. Second, their access to technology and social media has exploded.

Finally, Lewis suggests, children today are too “unemployed.” She doesn’t simply mean the occasional summer job for a high school teen. The term is a big tent, and she uses it to include household jobs that can help even toddlers build confidence and a sense of community.

“They’re not asked to do anything to contribute to a neighborhood or family or community,” Lewis tells NPR in a recent interview. “And that really erodes their sense of self-worth — just as it would with an adult being unemployed.”

Below is more of that interview, edited for length and clarity.

What sorts of tasks are children and parents prioritizing instead of household responsibilities?

To be straight-A students and athletic superstars, gifted musicians and artists — which are all wonderful goals, but they are long-term and pretty narcissistic. They don’t have that sense of contribution and belonging in a family the way that a simple household chore does, like helping a parent prepare a meal. Anyone who loves to cook knows it’s so satisfying to feed someone you love and to see that gratitude and enjoyment on their faces. And kids today are robbed of that.

It’s part of the work of the family. We all do it, and when it’s more of a social compact than an adult in charge of doling out a reward, that’s much more powerful. They can see that everyone around them is doing jobs. So it seems only fair that they should also.

Kids are so driven by what’s fair and what’s unfair. And that’s why the more power you give kids, the more control you give them, the more they will step up.

You also argue that play has changed dramatically. How so?

Two or three decades ago, children were roaming neighborhoods in mixed-age groups, playing pretty unsupervised or lightly supervised. They were able to resolve disputes, which they had a strong motivation to because they wanted to keep playing. They also planned their time and managed their games. They had a lot of autonomy, which also feeds self-esteem and mental health.

Nowadays, kids, including my own, are in child care pretty much from morning until they fall into bed — or they’re under the supervision of their parents. So they aren’t taking small risks. They aren’t managing their time. They aren’t making decisions and resolving disputes with their playmates the way that kids were 20 or 30 years ago. And those are really important social and emotional skills for kids to learn, and play is how all young mammals learn them.

While we’re on the subject of play and the importance of letting kids take risks, even physical risks, you mention a remarkable study out of New Zealand — about phobias. Can you tell us about it?

This study dates back to when psychologists believed that if you had a phobia as an adult, you must have had some traumatic experience as a child. So they started looking at people who had phobias and what their childhood experiences were like. In fact, they found the opposite relationship.

People who had a fall from heights were less likely to have an adult phobia of heights. People who had an early experience with near-drowning had zero correlation with a phobia of water, and children who were separated from their parents briefly at an early age actually had less separation anxiety later in life.

We need to help kids to develop tolerance against anxiety, and the best way to do that, this research suggests, is to take small risks — to have falls and scrapes and tumbles and discover that they’re capable and that they can survive being hurt. Let them play with sticks or fall off a tree. And yeah, maybe they break their arm, but that’s how they learn how high they can climb.

You say in the book that “we face a crisis of self-regulation.” What does that look like at home and in the classroom?

In schools, it’s kids jumping out of seats because they can’t control their behavior or their impulses, getting into shoving matches on the playground, being frozen during tests because they have such high rates of anxiety.

Really, I lump under this umbrella of self-regulation the increase in anxiety, depression, ADHD, substance addiction and all of these really big challenges that are ways kids are trying to manage their thoughts, behavior and emotions because they don’t have the other skills to do it in healthy ways.

You write a lot about the importance of giving kids a sense of control. My 6-year-old resists our morning schedule, from waking up to putting on his shoes. Where is the middle ground between giving him control over his choices and making sure he’s ready when it’s time to go?

It’s a really tough balance. We start off, when our kids are babies, being in charge of everything. And our goal by the time they’re 18 is to be in charge of nothing — to work ourselves out of the job of being that controlling parent. So we have to constantly be widening the circle of things that they’re in charge of, and shrinking our own responsibility.

It’s a bit of a dance for a 6-year-old, really. They love power. So give him as much power as you can stand and really try to save your direction for the things that you don’t think he can do.

He knows how to put on his shoes. So if you walk out the door, he will put on his shoes and follow you. It may not feel like it, but eventually he will. And if you spend five or 10 minutes outside that door waiting for him — not threatening or nagging — he’ll be more likely to do it quickly. It’s one of these things that takes a leap of faith, but it really works.

Kids also love to be part of that discussion of, what does the morning look like. Does he want to draw a visual calendar of the things that he wants to get done in the morning? Does he want to set times, or, if he’s done by a certain time, does he get to do something fun before you leave the house? All those things that are his ideas will pull him into the routine and make him more willing to cooperate.

Whether you’re trying to get your child to dress, do homework or practice piano, it’s tempting to use rewards that we know our kids love, especially sweets and screen time. You argue in the book: Be careful. Why?

Yes. The research on rewards is pretty powerful, and it suggests that the more we reward behavior, the less desirable that behavior becomes to children and adults alike. If the child is coming up with, “Oh, I’d really like to do this,” and it stems from his intrinsic interests and he’s more in charge of it, then it becomes less of a bribe and more of a way that he’s structuring his own morning.

The adult doling out rewards is really counterproductive in the long term — even though they may seem to work in the short term. The way parents or teachers discover this is that they stop working. At some point, the kid says, “I don’t really care about your reward. I’m going to do what I want.” And then we have no tools. Instead, we use strategies that are built on mutual respect and a mutual desire to get through the day smoothly.

You offer pretty simple guidance for parents when they’re confronted with misbehavior and feel they need to dole out consequences. You call them the four R’s. Can you walk me through them?

The four R’s will keep a consequence from becoming a punishment. So it’s important to avoid power struggles and to win the kid’s cooperation. They are: Any consequence should be revealed in advance, respectful, related to the decision the child made, and reasonable in scope.

Generally, by the time they’re 6 or 7 years old, kids know the rules of society and politeness, and we don’t need to give them a lecture in that moment of misbehavior to drill it into their heads. In fact, acting in that moment can sometimes be counterproductive if they are amped up, their amygdala’s activated, they’re in a tantrum or excited state, and they can’t really learn very well because they can’t access the problem-solving part of their brain, the prefrontal cortex, where they’re really making decisions and thinking rationally. So every misbehavior doesn’t need an immediate consequence.

You even tell parents, in the heat of the moment, it’s OK to just mumble and walk away. What do you mean?

That’s when you are looking at your child, they are not doing what you want, and you cannot think of what to do. Instead of jumping in with a bribe or a punishment or yelling, you give yourself some space. Pretend you had something on the stove you need to grab or that you hear something ringing in the other room and walk away. That gives you just a little space to gather your thoughts and maybe calm down a little bit so you can respond to their behavior from the best place in you — from your best intentions as a parent.

I can imagine skeptics out there, who say, “But kids need to figure out how to live in a world that really doesn’t care what they want. You’re pampering them!” In fact, you admit your own mother sometimes feels this way. What do you say to that?

I would never tell someone who’s using a discipline strategy that they feel really works that they’re wrong. What I say to my mom is, “The tools and strategies that you used and our grandparents used weren’t wrong, they just don’t work with modern kids.” Ultimately, we want to instill self-discipline in our children, which will never happen if we’re always controlling them.

If we respond to our kids’ misbehavior instead of reacting, we’ll get the results we want. I want to take a little of the pressure off of parenting; each instance is not life or death. We can let our kids struggle a little bit. We can let them fail. In fact, that is the process of childhood when children misbehave. It’s not a sign of our failure as parents. It’s normal”